The river system of district Murshidabad primarily consists of Ganga and the course of it’s distributaries of which the most important are the Bhagirathi, Jalangi and Bhairab. Due typical geographical characteristics, most of the rivers of district Murshidabad being connected to the mighty flow of Ganga are snow-fed as well as rainfed. These rivers which formerly had an active current are now merely spill channels of the great river, which during the Monsoons have the potential to carry flood water, but for the remaining part of the year there exists a very sluggish current. The streams are incapable of carrying large quantity of silt which they receive during the upper course and as a result this leads to shoal formation and thereby hampering navigation. The rivers situated in the East of the district are filled upto a certain extent during the dry season because of downward flow from the river Ganga. However, subsequent to the erection of Farakka Barrage at the Northern part of the district, there has been considerable shift in the river paths during last few decades. Added with the heavy rainfall during the Monsoons, flush floods and destruction of habitation and agriculture owing to the shift of the river streams have become common phenomena.

Ganga or Padma first touches the district of Murshidabad at the extreme Northern point and then flows in the South-East direction thereby forming the Eastern boundary with Bangladesh. The tributaries of Ganga or Padma are Bhagirathi, Jalangi and Bhairab along with an estuary of Mahananda located at Lalgola. Every year the Ganga is found to be creating and cutting away land along its course by a constant alteration of alluvium and diluvium. Large islands are continuously forming in the channel and some of them consist of several kilometres in length. The river Bhagirathi is bifurcated from the Ganga at Nurpur which is about 25 kilometres away from Farakka and then flows South-wards after running parallel to Ganga for about 2 kilometres. Near Jangipur it receives from the united water of the Bansloi and Pagla rivers from the West, and near Saktipur, the Chora Dekra, a part of Dwarka river, flows into it also from the West. It is a full-fledged river for about four months of the year but for the remaining eight months, it resembles an attenuated stream wandering through a wide expanse of sand. During the rainy season fresh spill from the Ganga flows through the Bhagirathi, but their confluence is obliterated by the large deposits of silt accompanied with the spill from the Ganga. The river Bhagirathi divides the district into two almost equal portions; Eastern part ‘Bagri’ and the Western part ‘Radh’. On the Eastern bank towns namely Jangipur, Jiaganj, Berhampore, Beldanga etc. are situated. Bhagirathi river leaves the district at the Northern portion of Plassey situated in the Nadia district. The larger discourse of Ganga taking the name Padma enters Bangladesh after creating the Eastern boundary of the district as well as the international boundary of India with Bangladesh.

The Jalangi river originates from the Ganga and flows along West of the Hangordaobah and later flows East-wards close to the international boundary of Bangladesh. Then it flows South-wards along the boundary of the districts Nadia with Murshidabad. The river Sialmari which is another branch of Padma meets Jalangi and results in frequent floods during Monsoons. Shortly after this, the river Bhairab, meets Jalangi river and loses its identity thereafter. This combined stream after traversing a zigzag course for some 20 miles along the boundary of Nadia and Murshidabad districts ultimately proceeds South-ward across Nadia district. The Bhairab is an old river and only a section of its earlier flows can be traced as of now. During the rainy season it receives water from Padma also. Bhairab originates from Ganga in Lalgola and after a short journey across this district meets Jalangi in the North of Nadia district and thereafter loses its separate identity.

The Bansloi is another tributary of Bhagirathi. It enters the district from Birbhum near the village Husainpur and flows Eastwards and thereafter falls into the Bhagirathi at the North of Jangipur.

The Dwaraka and Babla are two streams entering the district from the Birbhum district near Morgram and flows East-ward and then in the South-East direction forming the Eastern boundary of Kandi Sub-division and thereafter leaving the district at Raghupur. They are joined on the right bank by the Mayurakshi and the Kuiya respectively which also flow down from Birbhum district. Though moderate in size, these rivers have many names along with a number of tributaries and estuaries. The numerous backwaters and side channels connect them with the river Bhagirathi.

The Brahmani, Mayurakshi and Kuiya rivers originate from the hills of Birbhum district and thereafter flow in the Westward direction and ultimately merge with the river Dwaraka. These rivers meet at the Hizal Beel located at the Kandi Sub-division. Mayurakshi and Kuiya receives rivers Dwaraka and Babla. These rivers are originated from hill streams consisting of beds of pebbles and yellow clay and their depths have been reduced to a substantial extent owing to silt deposition inside district Murshidabad.

Many beels (large size lakes, also spelt as bil ) and tanks are located in the district. In the North, there lies an area of about 389 square kilometres consisting of a strip of lowlying plain land, which becomes a vast lake in the rains with village sites looking like islands. In the South, there is a plain of 129 sq. km. at the confluence of the Mayurakshi and the Dwaraka rivers, known as ‘Hizal Beel’. In the South-Eastern corner of the district, covering about 129 sq. km. in area there exists a vast swampy tract of dark clay. It receives the drainage of the swampy rivers located in some parts of the district and is popularly known as Kalantar Beel. There are many beels along the Eastern tract also. The Damus Beel connected with the river Bhagirathi is famous for producing a large variety of fishes. A feeder canal, 26.5 kilometres long, takes off the upstream of the Farakka Barrage on the right bank and fall into the Bhagirathi downstream of the Jangipur Barrage. This man made Farakka Barrage Project was taken up in the year 1960 with the objective of preserving and maintaining the Kolkata port and navigability of the Bhagirathi-Hooghly river. 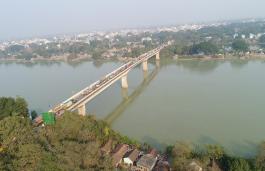 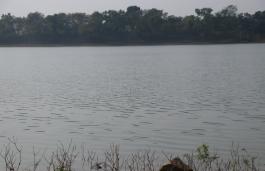 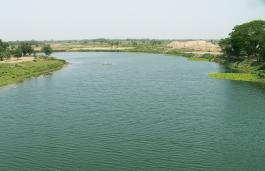 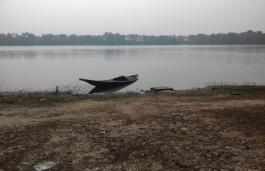 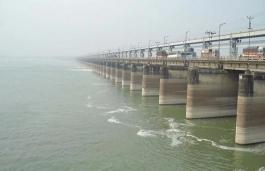