(a) Location and Size: 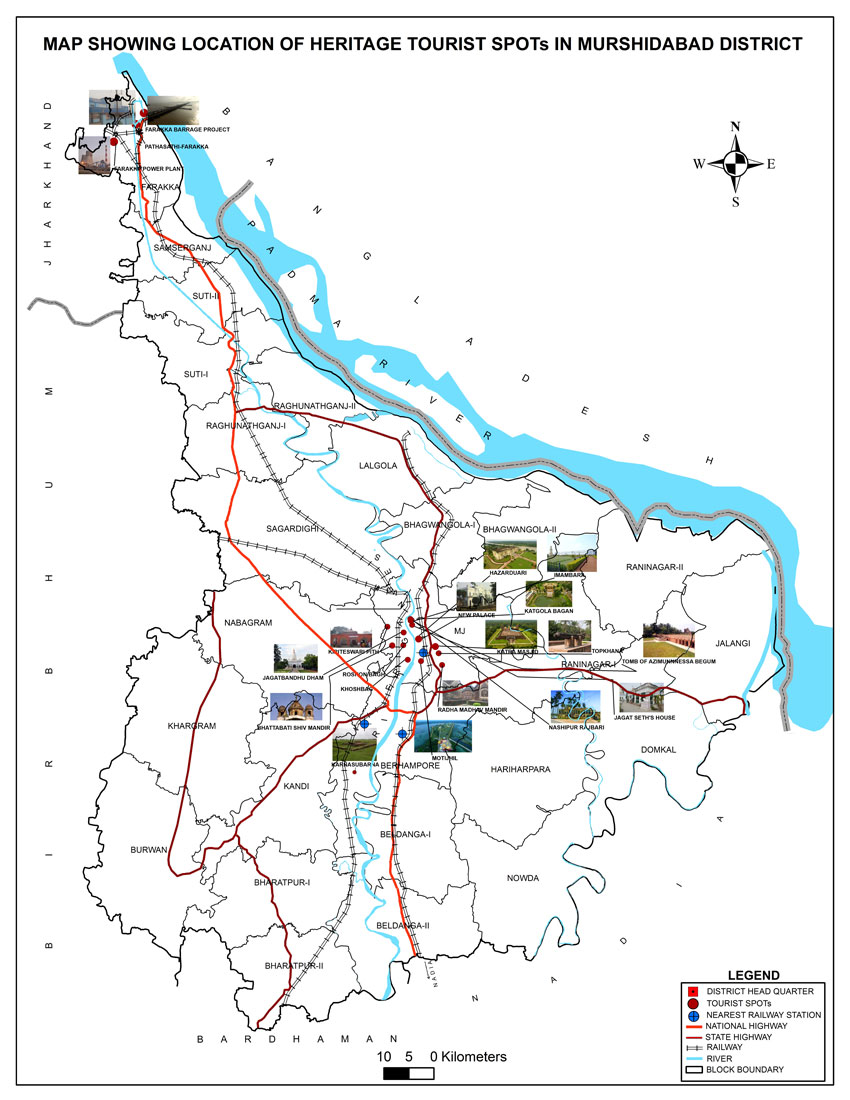 Geographical location shows that the district is located in the middle of West Bengal lying between 23º43’ North Latitude and 24º52’ North Latitude and 87º49’ East Longitude and 88º44’ East Longitude. The district has a natural boundary created by the lower flow of river Ganga, which is bifurcated to Padma (Eastern course) and BhagirathiHugli (Western course) near Dhulian at the Northern portion of the district. Immediately after bifurcation, the blossoming flow of Padma creates the Northern and Eastern boundaries of the district with district Malda to the North and Bangladesh to the East. The district has one of the largest international boundaries with Bangladesh compared to other districts of the State. Districts Barddhaman and Nadia lies to the Southern side of Murshidabad. State of Jharkhand (in the upper northern side) and district Birbhum are to the West of district Murshidabad. This district has a total area of 5324 sq. km. and it ranks 7th among all the districts of West Bengal in respect of land area. The international border with Bangladesh to the East covers a distance of 125.35 km. of which 42.35 km. is on land and the remaining area forms a riverine boundary (River Padma and her connected streams) forming the boundary of 10 C.D. Blocks.

The intermediate tract situated in the Indian territory that lies between Bhagirathi and Padma rivers and the location from which the great deltaic plain originated can be called Murshidabad. The district is divided into two broad zones namely Radh and Bagri, which are situated on the Western and Eastern side of the river Bhagirathi respectively. The Western tract or Radh is primarily a continuation of the sub-Vindhyan region composed of laterite clay. The altitude of land is slightly high and undulating, but is interspersed with numerous swamps along with beds of old river. The Radh zone derives the greatest elevation along the Western boundary of the district towards Birbhum, but there are also places situated within the Eastern limits where the clayey tracts are marked by banks which are 15 and 20 feet in height. The land situated in the extreme Western boundary slopes gently upwards towards the Birbhum district and the Rajmahal hills, which rise a few miles beyond the North-Western boundary of the district. Some hillocks are situated in this region, of which the most popular one is known as Dhuli Pahari. The soil of Radh area is mostly clay and lateritic clay type in character. The Eastern tract or Bagri lies almost entirely between the Ganga-Bhagirathi basin and is characterized by the existence of inundation along with many swamps. The soil of Bagri area is mainly of alluvial type and is characterised by comparatively light texture, low organic carbon content and the soil reaction ranging between slightly acidic to neutral.

Topographically the district can be divided into 5 sub-micro regions viz.

The region is situated on the Western tract of the Bhagirathi river. As the Rajmahal hill slopes gently down in this region the plain lies at the bottom of its elevation. The Eastern slope of the region is characterised by the existence of numerous cliffs and bluffs. There exists a substantial amount of low lying area in the North up to the basin of the river Bhagirathi situated within Samserganj, Raghunathganj alongwith Suti-I and Suti-II C.D. Blocks. 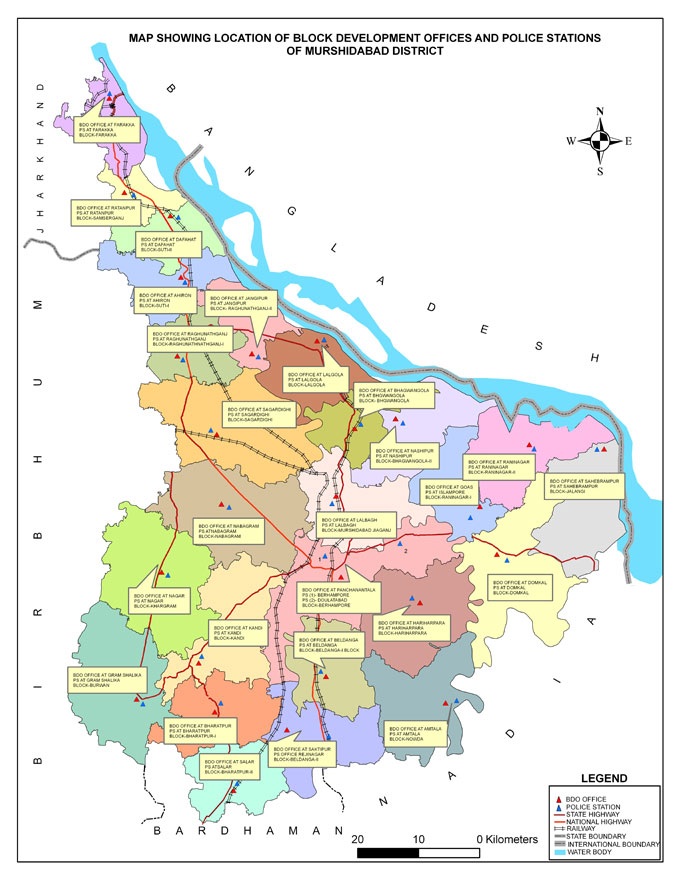 This region is situated in the South-Western corner of the district and exhibits the characteristic features of the Sub-Vindhyan region of Radh. 14

This basin is a long and narrow river valley which extends along the Ganga and Bhagirathi rivers. The Bhagirathi divides the region into almost two equal parts. The soil of this region is very much fertile and suitable for cultivation.

This region is a low lying area having alluvial soil pattern with humid climate. It originates from the Bhagirathi plain in the West and culminates into the Bhairab river in the East while the river Jalangi is situated in the South-Western region.

This region is a low lying area of “Bagri Tract” and is characterized by the nature of inundation along with many swamps. This region lies in the North-Eastern portion of the district situated between the Bhairab and Jalangi river. The district Murshidabad is situated at an average height of 19 metres above the mean sea level.

The climate of the district is characterized by an oppressive hot summer and high humidity almost throughout the year and a fairly even rainfall because of South-West Monsoon. The rainfall during the South-West monsoon season - June to September constitutes about 74.0 per cent of the annual rainfall. July and August are the rainiest months. The average annual rainfall in the district is 1,328 mm. Temperature along with other meteorological conditions of the district are more or less uniform. January is the coldest month with the mean daily maximum and minimum temperature at 23.8 º Celsius and 11.9º Celsius respectively. The highest temperature recorded at Berhampore was 46.1º Celsius on 25th May, 1961, and the lowest minimum was 3.9º Celsius on 16th January, 1933.